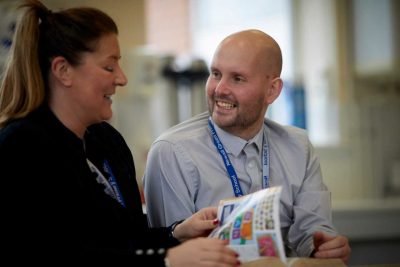 It’s been a strange start to our school year. Sadness at the passing of our much-loved colleague and Peace Mala leader, Sam Whitehouse (pictured above with Clare Mullally, SENDCO), is gradually giving way to a focus on using the energy he lived his life with to inspire us to focus on moving forward. We will uphold our commitment to Peace Mala and the promises he instilled, and will continue with all the projects Sam loved – outdoor learning, his chickens and his eagerness to teach the children about nature. Of course there are moments of grief, but Sam’s wit and fantastic sense of fun has also left us all with so many memories to smile about.

One of the last projects Sam was involved in was the ‘Bee in the City’ project. We ran a competition for all children in our school to enter where they were asked to design the bee around Peace Mala. During Arts Focus group, 7 winners were selected and collaborated ideas to produce a final design. The winners were given Art boxes as prizes. Our winning designers attended the official launch in Manchester with Miss Jeacott where they saw lots more bees and met the Lord Mayor. 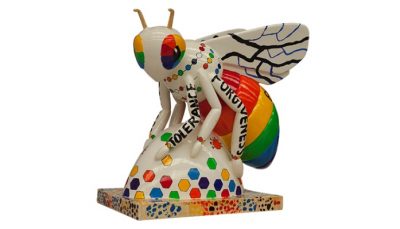 We’ll be getting the bee back to school to keep for good at the end of September  We hope that it will become part of a space in school where we can go to remember Sam and give thanks for everything he taught us.

Sam was determined not to let his class down over the past year. His resilience was astounding – however much pain he felt, he didn’t complain, and didn’t allow it to affect his teaching and his love for the children. Whilst sorting out his classroom, we found a poem that he’s written himself along with a book explaining where people go when they die. Selfless until the end, he was concerned for how his pupils would cope with his passing.

We read his poem to all our children in Assembly this morning, and thought it would be fitting to share it with the Peace Mala Community too:-

A Tale of Three Friends
A mouse called Mouse and a whale called Whale are two of the bestest friends,
Their owner Sam, who loves them dear, bought them with all of his spends.
One day the three whilst out at play, were having so much fun
Little they knew about the tale that had just about begun.
The three were digging for buried treasure near a well
Mum said ‘what a mess!’
They soon got bored and returned to the house but the friends appeared, one less.
Sam and Mouse raced back to the spot where digging they had been
They looked high and low and in between but whale could not be seen.
Then just as mum said lets go back,
He turned and saw the well
Sam peered deep down
And to his surprise he saw that whale had fell.
Now with all his might Sam stretched far down but whale could not be caught
Dad will be home soon he’ll reach – a great idea Sam thought.
Before dad returned an overcast of clouds and rain had come
Sam and Mouse cried and thought of Whale but Mum said,’ Nothing could be done.’
To bed they retired in hope that the morning would bring sun.
They’d wake up early without a doubt and off to the well would run.
When they arose to their dismay
Whale was no longer there
The well was full and Whale had vanished into thin air
Mouse and Sam froze on the spot, they were feeling awfully sad.
Mum squeezed them tight and took them in
Let’s have a chat with dad
Mum and Dad said sometimes those we love with all our heart have to go off somewhere else –
On a new journey they must start
This comforted Sam and also Mouse , they swore he would not be forgot!
Their friend called Whale who fell down a well, they loved him such a lot!

Written by Mr Whitehouse for the children of Newall Green Primary school to explain in his own words his passing.

This is a place where schools that have achieved, or who are working towards, Peace Mala Accreditation can share their Peace Mala related activities.

If you would like to contribute please email us so that we can provide you with a private login.