Following the piece on the BBC website, ‘Do You Know Your Awareness Bracelet?’, which featured the Peace Mala, we received numerous emails from all over the UK, USA, Germany, and even as far away as Thailand.

We were also contacted by the producers of BBC1’s ‘Heaven and Earth’ programme.

They came to the Peace Mala Centre on Tuesday, March 8, 2005 to film an interview with Pam Evans for the ‘Sign of the Times’ slot on the programme, which was looking at awareness bracelets.

They also filmed the Peace Garden. 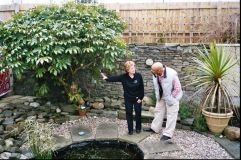