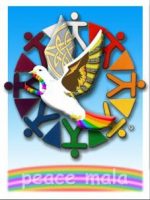 During the Autumn Term of 2004, members of the Peace Mala Club at Coedcae School in Llanelli, South Wales, set up a meeting to plan ways in which they could raise funds for the children of South Africa who were malnourished and orphaned as a result of the Aids pandemic. They also wanted to send Peace Malas as a symbol of friendship to those children who were heads of families.

Their teacher, Pam Evans, had told them about a new charity called ‘One Life’ which had been set up by Elena Utton, a lady Pam had met several times at Buddhist Summer School in Leicester University.

Pam invited a colleague, Gaynor Churchill, to join her and the children in their plans for fund raising. Gaynor, who is a food technology teacher, came up with the idea of a series of fund raising lunches for members of staff that could be prepared and served by the students.

Another idea was to organise a ‘Search for a Star’ type talent competition that could be held on the last day of term. With the Head Teacher’s agreement, the whole school would be invited to attend. Permission was granted and Pam approached three members of staff to take part in the talent show as judges. One of the teachers, Rhiannon Roberts, even agreed to dress up as a Sharon Osborne ‘look-alike’.

News of the funding for ‘One Life’ soon spread around the school and many other small fund raising activities started to take place including one member of staff, Elaine Lawler, who offered to wear a variety of different coloured stockings and invite children in Year 7 to guess how many days she could last for. 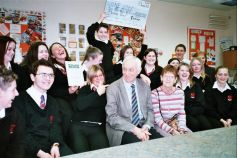 The whole fund raising event was a huge success. The lunches were wonderful. One member of staff commented that the food was a good as any she’d tasted in a top class restaurant. The Search for a Star talent show took place on the last day of the Christmas term and amazed the whole school. All the fund raising activities raised a total of £650 and enough money for 50 Peace Mala gifts for Zulu children who are now the heads of families.

Pam contacted Elena Utton who was thrilled and agreed to visit the school after the Christmas holiday so that she could receive the cheque and Peace Malas personally, and thank all the children and staff involved.