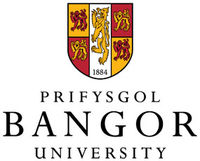 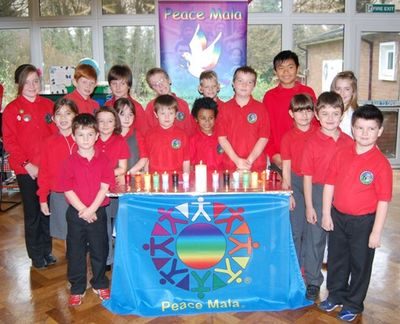 On 4th October 2010, Carol Bassett, Headteacher of Catwg Primary School in Cadoxton Neath, along with Liz Broom, a member of staff, travelled to Manchester to attend the Peace Mala Festival. During the festival they received the Peace Mala flag and their certificate of Peace Mala Accreditation for the school from Terry Waite CBE who was guest of honour and main speaker at the festival.

As the pupils of Catwg were unable to attend the festival in Manchester, the school organised its own celebration on Monday 22nd November and invited Pam Evans the Founder of Peace Mala, trustees of the Peace Mala charity, and local dignitaries, including the Mayor, to attend a special Peace Mala assembly. This was a joy to attend. One governor reported to the school that she was moved to tears by it all and hoped that more schools would engage with the project. 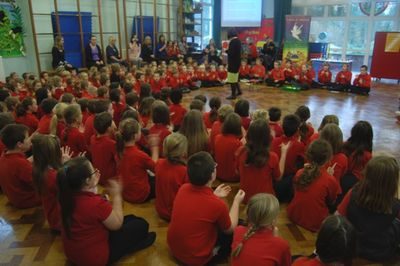 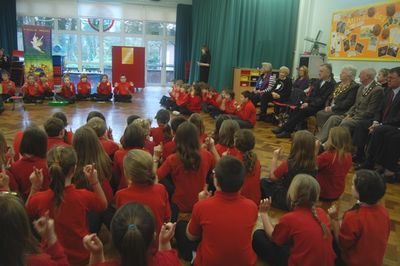 Assembly member, Gwenda Thomas, who was present had this to say, “It was with great delight that I was invited to attend Catwg Primary School for their Peace Mala Accreditation celebration, especially as they were the first school in Neath Port Talbot to achieve this status. I was also honoured to be presented with a Peace Mala prayer, written by a pupil of Catwg, which I now proudly display in my office.

“The Peace Mala project is a wonderful way in which our young citizens can learn mutual respect for all the communities of our world, both cultural and religious, and to promote peace on earth and tolerance of our fellow man.

“I am truly impressed by the message of Peace Mala; to pass on to our children the value of world harmony and compassion, in such a creative way, is a beautiful gift.”

The Corporate Director for Education, Leisure and Lifelong Learning for Neath Port Talbot, Karl Napieralla OBE, was also present. He is very impressed with the Peace Mala project and gives it his full support and endorsement.

Council Leader, Ali Thomas, said, “Congratulations to Catwg Primary School for achieving such a worthwhile award. It is important for young people to learn about global citizenship and diversity and this project gives them the opportunity to learn about other faiths and cultures.”

Carol Bassett, Headteacher of Catwg Primary School commented, “We are thrilled that Catwg is the first school in Neath Port Talbot to be awarded Peace Mala accreditation. Catwg is proud of its inclusive ethos and we feel that the Peace Mala message fits perfectly with the work we do in school promoting peace, friendship and respect and in celebrating diversity.

“The Peace Mala message is simple – we are part of a world community where everyone is unique and special, we all deserve to be treated with respect and to live in peace.

“We are looking forward to continuing our Peace Mala journey and sharing its message to help build a better world.” 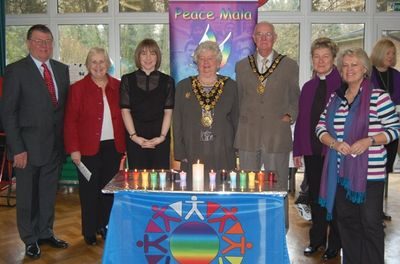 Pam Evans, Founder of the Peace Mala project commented, “The trustees and I are delighted that Catwg is the first school in Neath Port Talbot to achieve Peace Mala Accreditation. They have worked hard to achieve this and their award is well deserved. I do hope that other schools will follow their excellent example and that we will see more Peace Mala flags flying in Wales. Catwg is our fourth Accredited school. The others are: Hafod Primary Swansea, St Helen’s Primary Swansea and Woodheys Primary School in Sale Cheshire.”