Youth leaders of Peace Mala, along with Pam Evans, meet members of the Japanese Royal Family at Lampeter University – June 16, 2003

Whilst waiting for the Supreme Primate, youth team leaders Emily Morris, Imran Sheikh and Kelly-Anne Thomas, together with Pam Evans, were interviewed by BBC, HTV and S4C. 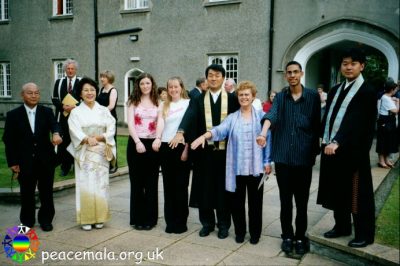 “This was a most wonderful experience for all of us. When Dr Wendy Dosset, senior lecturer in World Faiths, and Vice Chancellor Professor Keith Robbins invited us along to present Peace Malas to His Eminence and his family, we were thrilled. It was a great honour to be in their presence and something that none of us will ever forget. We were particularly thrilled when they put on their Peace Malas and kept them on for the rest of the day.” said Pam Evans.

His Eminence was born in 1965 as the first son of the late Kosho Otani, the 25th Supreme Primate of the Higashi Honganji Temple. He was raised to succeed the Dharma tradition of the Temple, which has been the headquarters of Pure Land Buddhism in Japan for 800 years. Pure Land Buddhism is the largest denomination of Buddhism in Japan. His Eminence was installed as the head of the church as the 26th Supreme Primate (Hosshu) in 1999.

The Supreme Primate is a direct descendant of St Shinran and he is considered as the embodiment of the Dharma preserved and transmitted for 26 generations meticulously to date and His Eminence is respected also as one of the cousins of His Majesty the Emperor.

His Eminence wishes to promote an international understanding of the world religions.