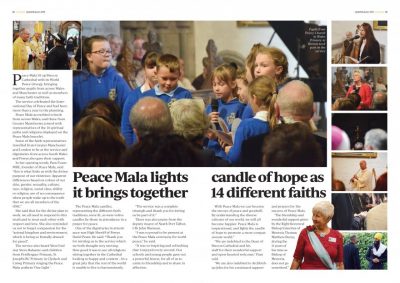 A new article about our International Interfaith Liturgy for World Peace, which was held at Brecon Cathedral on the 16th of September, has been published in Cymuned, the magazine of the Diocese of Swansea and Brecon.

Cymuned have very kindly published articles over the course of the year about our big interfaith event, focusing on the music during the service; and also on our symbolic doves of peace, which were re-blessed with incense and holy water as part of the ceremony.

There are some lovely photos from the event, with pupils from Priory Church in Wales school in Brecon giving the messages of the Peace Mala, which they did along with St Joseph’s Catholic Primary School in Clydach, South Wales, taking centre stage.

The magazine can be read online and downloaded as a PDF, and copies can also be picked up from churches in the Diocese of Swansea and Brecon.