Pam Evans (founder and CEO of Peace Mala) made a quick visit to Manchester, where the project has many amazing Peace Mala schools.

On the morning of Tuesday 21st May, she visited Baguley Hall Primary School to present their Silver Award Accreditation. The school has been involved with Peace Mala for five years, and during that time has produced the most amazing work. The school also became a sponsor/guardian of one of our Symbolic Doves of Peace in 2015. Ms Olivia Grundy, who was the Peace Mala coordinator for the school at the time, took the dove to Zambia and met up with Rachael Webb (Headteacher of Hafod School, Swansea), who had also travelled to Zambia with one of our Peace Doves. They met in Livingstone, Zambia.

The morning assembly at Baguley Hall was wonderful… especially the singing of the children. Members of the local Quaker group, and the Rabbi from the Orthodox Synagogue also attended the event.

We look forward to Baguley Hall Primary joining us at Brecon Cathedral for our World Peace Liturgy on Monday 16th September.

In the summer of 2018 Wild in Art and Manchester City Council brought all of Manchester’s communities together for Bee in the City, one of the most spectacular public art events the city has ever seen. Two of our schools (St Agnes’ CE Primary School, and Newall Green Primary School) engaged in this wonderful project. 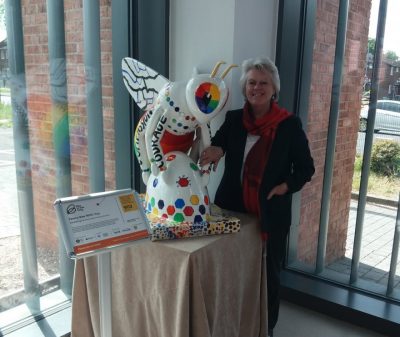 In the afternoon, it was the turn of St Agnes’ CE to celebrate their Peace Mala Accreditation, with the school achieving their Bronze Award. Many special guests from faith communities and peace projects in Manchester were also invited to celebrate the school’s special day.

Their special guests were:

Here are some wonderful photos taken by the school, including pupils dressed up in the colours of the Peace Mala bracelet. Pam was especially impressed with the amazing Peace Mala cake, and declared it possibly the biggest Peace Mala cake in the world to date! The ceremony was amazing, and Shelley Lynton, Assistant Headteacher is certainly to be congratulated for all her hard work.

It was especially exciting to meet supporters from several faith communities, including our Buddhist friends from the Fo Guang Shan Temple, and to meet Hardev Singh who held our Symbolic Dove of Peace Inaaya Noor (‘The gift of God and light’), which St Agnes’ Primary have been sponsor/guardians of. Whilst the dove has been under the guardianship of St Agnes’, it has visited Lahore in the Punjab, Pakistan, and St Denys’ School in the Himalayan/Kashmiran foothills, and also been on a journey from Kettlewell to Grassington in the Yorkshire Dales with 36 Finnish teenagers. These journeys of the dove were with the Director of Education, Canon Maurice Smith CB.

Many congratulations on all your wonderful work, St Agnes’ Primary. We look forward to celebrating your Silver Accreditation in the future.

St Agnes’ CE Primary will also be joining us at Brecon Cathedral in September. Hardev Singh from Monton Street Sikh Temple has agreed to come to the Cathedral and be our Sikh representative for the procession of the faiths and the lighting of the peace candle for Sikhism.

The Lord Mayor of the City of Manchester, Councillor Abid Latif Chohan, has also expressed interest in our Brecon Cathedral event, and hopes to be with us.

You can read about the ceremony, and view more photos, on St Agnes’ website here.