The launch event was attended by a mixture of organisations, including some local mosque and church representatives, as well as Muslim converts, their families and wider Muslim community supporters.

Introducing the speakers, WMCF Trustee, Owain Williams, called on members of faith and non-faith based organisations, to work with the centre in common cause towards creating a fairer society.

Director of the Ihsan Institute, Shaykh Ahmed Saad, spoke of the importance of such centres as hubs of social contact and that building community requires moving away from virtual online realities to creating peaceful real world realities.

More than 60 guests in attendance were shown a short film produced by filmmaker, Ruslan Pilyarov, on the origins of WMCF, time-lapse footage of the renovation work carried out by the trustees themselves to transform the centre, and plans for the future.

WMCF Trustee Heather Gruggwyn Aboulgasem, said, “Up until this point our courses, classes, lectures, and gatherings were all taking place in different venues across South Wales. Although some of that needs to continue, not having a central place for people to get in touch with us and for us to grow from, was becoming a real impediment.”

Matthew McDonald, also a Trustee, added, “It’s quite empowering to finally have our own place; somewhere Muslim converts, our families, and people of any faith or non-faith background can be themselves in an environment which is welcoming and non-judgmental.” 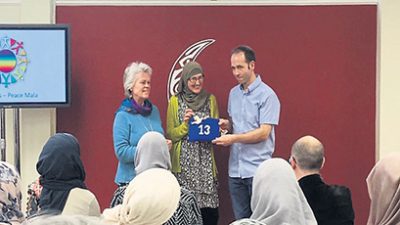 This photo (credit: Welsh Muslim Cultural Foundation) shows the founder of Swansea-based charity Peace Mala, Pam Evans, presenting a symbolic interfaith dove of peace, which has travelled to Jerusalem and Makkah, to trustees Donna Sandercock and Edward Seddon for the centre to retain temporarily.

Accepting the dove on behalf of the trustees, Donna Sandercock, said, “We thought it would be fitting at the opening of our centre, to host the Peace Mala interfaith dove as a way of reaffirming our commitment to peace-building in society.”

Edward Seddon added, “We hope that this centre will contribute, even if only in a small or localised way, towards reversing the suspicions and tensions between people which polarising voices have encouraged over recent years.”