The Journal of the Foundation for Theosophical Studies – Spring 2016 Vol 7 No.1

The word ‘mala’ is Sanskrit and means ‘garland of flowers’. In the East a mala is a string of beads used in meditation or prayer and each bead or ‘flower’ focuses on a prayer or mantra. A ‘Peace Mala’ is different because it is a vision for the future and wearing the Peace Mala is a promise to help create a better world. 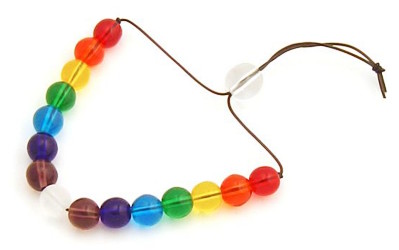 This symbolic bracelet is a double rainbow which promotes friendship, respect and peace between all faiths and none and between all people in our world. It cuts through all forms of prejudice and celebrates what makes us different from each other. When creating the design for the Peace Mala bracelet I was aware that the rainbow is an important symbolic link between heaven and earth in many cultures. Rainbows are rare and magical and double rainbows even more so. I also realized that the rainbow design would appeal especially to children and young people. Something simple but effective that would engage the minds of young people and adults; a symbolic bracelet, loaded with messages, that would be fun to make and wear.

The Peace Mala bracelet comprises of fourteen coloured beads with a central white or frosted white bead strung between symbolic knots. The central white bead represents the wearer. The final single bead is used as a toggle to bring the bracelet around the wearer’s wrist. This represents unity, harmony and peace. The rainbow beads focus on the Golden Rule which is universal to all compassionate faiths and philosophies: “Treat others as you would wish them to treat you.”

Running through the peace mala is a simple thread which holds all the rainbow beads together. This may be called the Golden Thread of Spirituality which connects us all through the love in our hearts: acknowledging the Golden Rule and our spiritual unity opens up the pathway to peace. Its intention is to educate and remind everyone that this rule is recognised by many scholars, teachers and philosophers. The Peace Mala beads also represent the human family in all its glorious diversity and Divine potential. Our compassionate wish is for people, animals and the environment to be at peace. How wonderful it would be if the world could realize that the diversity of the human race is something to be celebrated and not feared.

The Peace Mala project works to educate and empower children, young people and adults, especially those who are marginalised because of their ‘perceived difference’, and we run a lot of programmes with schools and community groups. Our goal is to cut through all forms of prejudice and celebrate what makes us different from each other. We also contribute to education for global citizenship, by promoting respect, understanding and peace between communities, cultures and enlightened compassionate faiths. Peace Mala supports Human Rights, confronts bullying and all forms of prejudice. Peace Mala reminds us that we all belong and that communities filled with colour and difference make life more interesting and exciting.

The long lasting improvements to community cohesion and interaction between faith and cultural groups can clearly be seen in the schools, colleges and organisations where Peace Mala has been introduced. We have a catch phrase for Peace Mala which reads: “Compassionate Education that Empowers and Embraces All Uniting the World in Peace.” 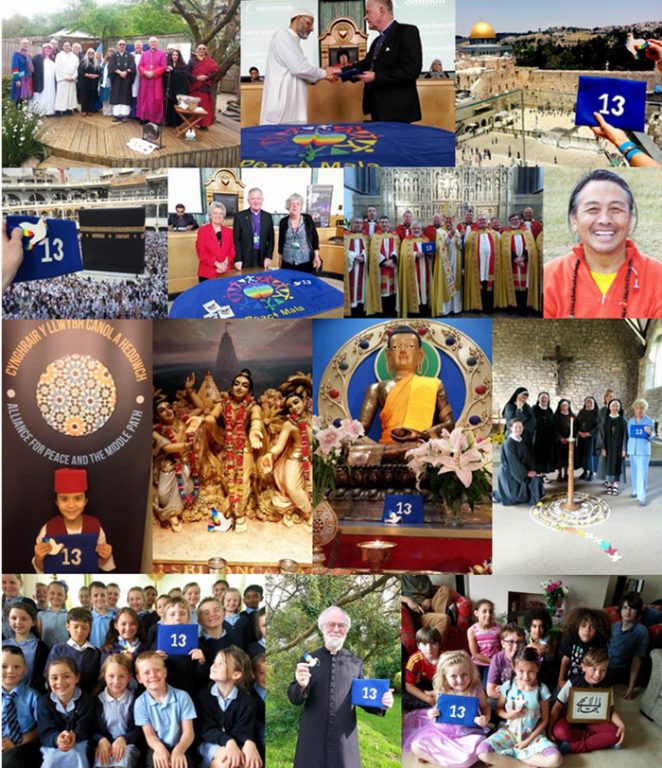 In the spring of 2015 Peace Mala introduced a new initiative with 14 Symbolic Doves of Peace and it has been a wonder and a joy to see how far these doves have already travelled with our message of hope, friendship, respect and peace for all who live on this planet we call our home. Dove 13 is the Symbolic Interfaith Dove of Peace and has a very important job to help promote greater understanding between people of all faiths and none. Here it is shown at the Yungdrung Bon Pre-Buddhist Tibetan Centre Wales and in Swansea Orthodox Synagogue

It has already made the most amazing journeys between the various faith communities across the country and abroad; visiting Jerusalem with members of the Orthodox Jewish community of Swansea, the Holy Ka’aba in Makkah with pilgrims from the Muslim brothers and sisters of CYLCH. CYLCH (Cynghrair Y Llwybr Canol a Heddwch – Alliance for Peace and the Middle Path), which was formed by seven Muslim organisations in Wales on 21st September 2013 (International Day of Peace) to promote the balanced, moderate, middle path of Islam. Inter-faith dialogue for peace is a vital process in the current world climate of fear, misunderstanding and terrorism.

When Peace Mala reached its 10th year in 2012 we celebrated our work with a five day walking pilgrimage for world peace across the sacred landscape of the Gower peninsular in South Wales. Dr Rowan Williams a patron of Peace Mala, who was Archbishop of Canterbury at the time, wrote a letter of encouragement for the pilgrims. At the end of the letter he said this: “The challenge of making and keeping peace is a task far too great for any one faith community to tackle on its own, and the deeply impressive work of the Peace Mala network over the last ten years has consistently reminded us of this. It has been a privilege to be involved with this vision, and I pray every blessing on all it continues to do.”

Professor John Andrew Morrow, an Islamic scholar, had this to say: “At a time when a small, but vocal, minority of extremists promote hatred, and a majority of people maintain silence, it is a relief, and a sign of hope, to find people like yourselves who are so passionately committed to the cause of peace. As Peace Mala argues, ‘The voices of intolerance are all around us – the voice of tolerance needs to be louder.’ Let us work together and bring our voices together like a choir singing a song of friendship, respect, peace, tolerance, love, compassion, and forgiveness. Perhaps, then, we can bring more light to this dark world.”

As we move into the future we are experiencing a new dimension of exciting possibilities. There has always been darkness in this world but at this present time we are also living in a period of great spiritual awakening and remarkable planetary interconnectedness. Within this century, more than ever before, we have become exposed to the diverse and wonderful spiritual traditions of our planet. This in turn has made us aware of the rich cultural and spiritual heritage of the human family.

By embracing the universal truths that all religions and spiritual paths share, we can help build bridges of peace and dissolve the boundaries that normally divide people from each other. At the same time, we can still honour and celebrate each person’s own unique ethnic, cultural and spiritual heritage. The Peace Mala story is one of continuing growth as it reaches out to all people in our global village.

Our message is simple: “Treat the next person as you wish to be treated yourself.”

Peace Mala was founded by Pam Evans, a member of the Theosophical Society and Secretary of Swansea Lodge. For more information about Peace Mala please telephone 01792 774225 or email info@peacemala.org.uk

Peace Mala has many ambassadors around the country. Please contact Pam if you would like to help or become an ambassador.

To find out more about the Foundation for Theosophical Studies visit: http://foundationfortheosophicalstudies.co.uk