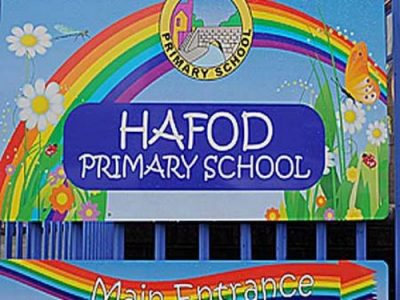 On Thursday 24th October 2013, Hafod Primary School Swansea celebrated their achievement of Peace Mala Re-Accreditation with an amazing ceremony of song, dance and film explaining their Peace Mala work. Huw Lewis AM, Minister for Education and Skills with the Welsh Government, presented the re-accreditation certificate. Keith Broadbent, Deputy Lord Lieutenant of West Glamorgan, presented the Peace Mala flag. A speech praising the school’s achievement was given by the Lord Mayor of Swansea, Cllr June Stanton. Other dignitaries, including the Deputy Leader of Swansea Council, Cllr Christine Richards, members of the cabinet and Mike Hedges AM also attended.

Two articles about the event appeared in The South Wales Evening Post and The Bay magazine.

Peace Mala Founder, Pam Evans, commented,
“Hafod Primary is a magical school that is achieving wonders in a community first area of the city which has a large cultural and ethnic mix. It is a delight to visit and sets an example of educational excellence for the whole of Wales.

“Hafod was the first primary school in the UK to engage with the Peace Mala project which I started in the aftermath of 9/11. I am thrilled that they’ve gained Re-Accreditation in this our eleventh year. The pupils, many of them Bangladeshi, have worked so hard to achieve this. I am very proud of them and the teachers who have supported them.”

Rachael Webb, Headteacher of Hafod, commented,
“Our school is a multicultural haven for the children of Hafod where we celebrate our differences and live in harmony.

“We encourage our parents to work with us and the pupils on projects around the school. Peace Mala is central to what we do. The project work that we have undertaken has made a huge difference to our pupils, staff and parents. Women (mums and grandparents) feel more confident coming into school and are made to feel welcome. Relationships between staff and parents have improved and this has made an impact on the community. Children understand and display tolerance, respect, kindness, understanding, friendship, hope, honesty, peace and unity. Everyone feels included.”

Hafod Primary School is easily recognised for the impact the symbolic Peace Mala bracelet has on its buildings. A rainbow encircles the school on the outside and threads through all the rooms on the inside.