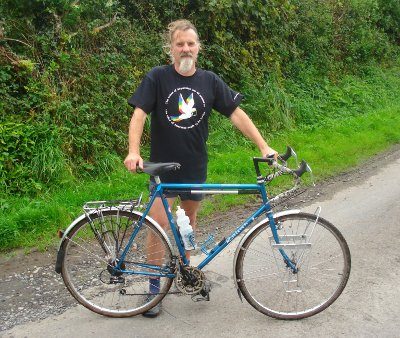 Andy Cawley, a gifted Kinesiologist, decided to celebrate his 50th birthday by doing something different and memorable. His plan was to cycle from John O’Groats to Land’s End. Andy felt that his journey would be especially significant if his cycle could raise sponsorship money for the work of Peace Mala.

To help send Andy on his way, we decided to hold a social evening and fund raising event at The Junction Cafe Restaurant in the old Mumbles Rail Station at Blackpill near Mumbles Swansea. A number of gifted musicians agreed to provide musical entertainment and a buffet of wonderful food with vegetarian choice was offered by the cafe. Well over eighty supporters turned up. The evening proved a tremendous success and was enjoyed by everyone.

Below is a slideshow of images relating to the event.

John O’Groats to Lands End is the traversal of the whole length of the island of Great Britain between two extremities; in the northeast of Scotland and the southwest of Cornwall. The journey takes most cyclists ten to fourteen days.

Andy began his journey from John O’Groats on the 17th of August 2010 and arrived at Land’s End, as planned, on the 6th of September 2010. He celebrated his 50th birthday on the 30th of August having arrived in Shrewsbury.

He posted comments and photographs of his journey on his Facebook page and reported his progress to Peace Mala HQ in Swansea.

The journey proved an unforgettable trip of almost a thousand miles that raised £1,300 for Peace Mala.

Andy’s comments after finishing the cycle

The start and finish just happen, it’s what we do in between that the journey is about. It really is mind over matter. I could have had a dreadful time, full of pain, effort, boredom. I didn’t choose to have that I chose to have peace, love and beauty.

Allowing the journey to unfold and trusting that all is well and will be well brought lovely experiences. Once I started to try to impose and control future outcomes – then the “wheels came off”!

After each uphill climb there is a beautiful view and a relaxing free wheel. Uphill climbs are an effort, it’s OK to slow down, to stop and then to carry on.

Sometimes we lose our way and have to go backwards, but in the overall scheme of things, it’s still going forwards. The start and the beginning are really the same! In material terms there’s no point to the journey, it’s the people and beauty on the way that give it meaning.

If I travel too fast I don’t see anything. We have enormous reserves of strength to call upon if needed.

People want to get involved in our journeys and get benefits themselves from doing so – even if we ourselves have no idea what their benefits are.

All journeys begin with a thought. There are risks involved. Sometimes on our journeys we don’t reach our planned destination … it doesn’t matter. If we can do a little good along the way, that’s good.

The experience of supporting Peace Mala gave me a lot back and I would encourage others to support Peace Mala actively. As you say, unless the voice of tolerance (love) is used, then the voice of fear and intolerance prevails.

Thank you Andy for your awesome journey and fund raising for Peace Mala!

Thanks also to everyone who sponsored Andy, joined him on parts of the journey and to those who supported us at the Farewell Evening.