Young people from the Sandfields area of Port Talbot in Wales have won a prestigious award for their work promoting world peace and global citizenship.

The Youth Inclusion Programme (YIP) put forward their artwork for the Peace Mala International Awards for Youth 2009 and were declared winners of the Senior Prize. 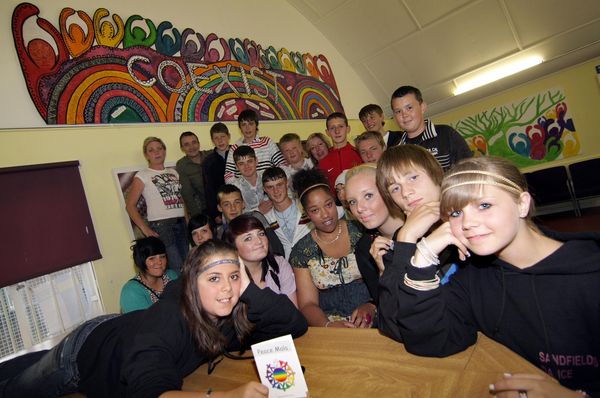 Jan Hines, Project Worker at the Sandfields and Aberavon Youth Inclusion Programme said: “The young people took part in a series of workshops delivered by Pam Evans, founder of the Peace Mala organisation. The Peace Mala project was originally set up following the 9/11 tragedies and consequent bullying of a young boy.

“The project aims to tackle all forms of bullying by informing young people about the similarities between the various world religions as opposed to the differences.”

The award is the result of months of hard work by the young people who attend the YIP. In February, the teenagers took part in a series of workshops and created Peace Mala bracelets with beads symbolising the different world religions.

“We used the project to deliver work on global citizenship and to promote tolerance and respect for each other and our community,” the young award winners explained. “We began work on our entry for the Peace Mala Award during the Easter half term holidays.”

The YIP incorporated the creation of the artwork, with the help of artist Julian Lewis, and the production of a DVD and the recording of a song, exploring the themes of Peace Mala, with Cultural Fusion Wales. The production of the song and the DVD were funded by The Arts Council of Wales. They were produced during Whitsun half term and also formed part of the winning entry.

The young people of the Youth Inclusion Programme will attend the Award Ceremony at the Welsh Centre for International Affairs/UNA Wales Temple of Peace in Cardiff on September 14th.

Jan Hines added: “The young people responded magnificently to this project and all of the staff at the YIP are extremely proud of them.

The Youth Inclusion Programme Peace Mala film is now on ‘You Tube’. Take a look at it here.