A Swansea school’s can-do attitude has helped it win a prestigious prize, as KAY BYRNE reports.

A banner in the hall of Trallwn Primary School reads: “No-one can do everything, but everyone can do something.” That’s the spirit that has helped them come top in a worldwide youth competition promoting peace and religious tolerance.

With terrorist attacks and worries over immigration having the opposite effect, children and staff at the school wanted to do their bit to overcome prejudice and break down barriers between different races and religions. So they entered the International Youth Awards organised by Swansea-based charity Peace Mala.

Sian Hopkins, the teacher who led the project, said: “We don’t have a lot of money but we scrounged some hearts left over from a Valentine’s display at Asda. The children cut up key words in rainbow colours and stuck them all over the hearts. It was a great way to teach the kids about different faiths.”

The school won the junior section of the competition and judges Ros Moule and Pam El-Hosaini said they were very impressed by the effort the Trallwn pupils had made. They were also pleased by the caring attitudes the children displayed towards each other, to strangers and to the planet.

“How immensely exciting, to find this inclusive, friendly ethos clearly embodied in everything the children did,” they said. “The school received the highest grade in a recent inspection for its care, guidance and support of learners, a third of whom are travellers, and the school is by no means in a privileged area.”

Peace Mala was set up by former religious studies teacher Pam Evans in the wake of the September 11 attacks. She came up with the idea of a double rainbow bracelet, each bead representing a major world faith, after some of the Muslim pupils at her school were bullied.

The message has spread rapidly, winning the backing of religious leaders including the Archbishop of Canterbury Dr Rowan Williams and His Holiness the Dalai Lama of Tibet. The bracelet is now being used as a teaching aid in schools around the world.

“The message of all religions boils down to one golden rule: Do to others what you would wish to be done to you,” said Pam. “If everyone remembered that, the world would be a better place.”

It’s a message that children at St Michael’s School, Llanelli, have also taken to their hearts, winning the senior section of the youth awards competition. St Michael’s teacher Hollie Yeoman said: “We had a small group of very committed youngsters from years seven and 10 who organised a lunchtime event, where all members of the school were invited to come and draw around their hands and write inside what they saw as a positive message for a more peaceful world.” 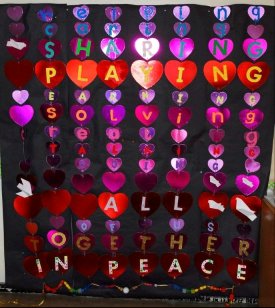 Judges Ros Moule and Pam El-Hosaini said: “The teacher concerned was not an RE specialist, but showed an open-minded commitment to global citizenship and interfaith perspectives. She generously praised the students, who were dynamic in their response and did most of the work in creating and displaying a wonderfully colourful exhibition.”

The St Michael’s pupils beat off competition from far-flung entrants, including the Salem Lutheran Church Youth Group in Pennsylvania, USA, and Teesdale School, County Durham, both of whom were highly commended for their entries.

The Peace Mala International Awards for Youth competition is open to all schools, colleges, youth clubs and faith groups. The competition is divided into two age groups: juniors (5-11) and seniors (12-18). “The idea of the youth awards is to get children thinking,” said Pam Evans. “We ask them to come up with a project that supports the aims of Peace Mala. It can be done through a variety of media such as literature, art, music, dance, drama, ICT, media and photography.”

A ceremony for this year’s winners will take place in the UNA Temple of Peace in Cardiff on Monday, September 24.